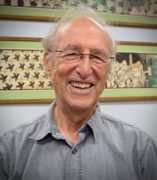 My research interests are diverse.  The main thrust of my earlier work was in experimental studies at elevated temperatures and pressures aimed to improve the understanding of processes occurring in the upper mantle and crust. One area of my interests is in igneous rocks, such as carbonatites and kimberlites, that indicate the presence of carbon dioxide in the upper mantle, and suggest that the mantle was and is an important and active carbonate reservoir. For the understanding of long-term changes in the geochemical cycle of CO2, this mantle reservoir is of primary importance. For example, weathering of the continental crust during the Hadean and Proterozoic without significant formation of carbonate rocks such as limestone and dolomite requires that the mantle during the early earth’s history was an active participant in the geochemical cycle of CO2.

I also worked on the non-equilibrium partition of trace elements between the granitic melts and an exsolving vapor. Important in this process is the diffusion rate of various simple and complex components in siliceous melts. Applications relate to the differentiation of andesitic and granitic melts, formation of ore deposits, volcanism, etc.

I developed a high-pressure (to 950 °C and 10 kbar) differential thermal analysis system (HP-DTA) for studies in both open and closed systems.  This equipment was useful in understanding rapid mineral reactions at high temperatures and pressures.  It also allowed me to work, together with Steve Guggenheim, on the stability of water and other substances such as organic material in the interlayer of selected clay minerals.

Recently, along with Steve, we developed various medium pressure environmental chambers which we use for two different projects.  The first one is concerned with the effect of methane and carbon dioxide on clay minerals. We found that that methane can enter the clay structure to form clay-methane hydrate complexes at low temperatures and moderate pressures, conditions are commensurate to the ocean-floor.  We also found that introduction of carbon dioxide to relatively deep reservoir sediments influences the hydration state of clay minerals and may cause fracturing of these sedimentary rocks.  The second project is concerned with the dissolutions/weathering of minerals, such as olivine, lizardite, and plagioclase, or rocks, such as basalt and serpentinite.  Temperature strongly affects the weathering rate of silicate minerals. Thus, we demonstrated that the dissolution rate of olivine is considerably more temperature dependent than previously thought. These projects are related to the safety of CCS (carbon capture and storage), as well as to mineral carbon sequestration to reduce the CO2 content of the atmosphere.