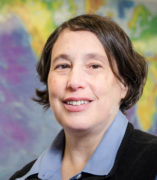 1. Thermal evolution of oceanic lithosphere and hydrothermal circulation. I used heat flow and depth data as a function of lithospheric age to calculate a new reference model (GDH1 = Global Depth and Heat flow model) for oceanic lithosphere that better represents the average observed depth and heat flow with age. The large difference between the observed heat flow and the higher heat flow predicted from thermal models for young (< 50 Ma) crust is interpreted as heat lost by hydrothermal circulation. To transfer this much heat requires that the equivalent of the volume of the entire ocean cycles through the oceanic crust every few million years. My research includes aspects of examining how far fluid flows in the crust and how local conditions can influence the flow.

2. North America's Midcontinent Rift system. Lake Superior and the spectacular scenery around it, as seen in places like Pictured Rocks and Apostle Islands National Lakeshores, result from one of the more important processes shaping our planet - the breaking apart of continents to form new oceans. I and other researchers are studying the spectacular 1.1 billion year old Midcontinent Rift System (MCRS). The rift failed, leaving a 3000 km long belt of volcanic and sedimentary rocks that are exposed in the Lake Superior area but buried by younger rocks above its two major arms that meet in the Lake Superior region. One arm extends southwestward at least as far as Oklahoma, and the other extends southeastward through Michigan to Alabama. Recently I have proposed that it looks like the MCRS formed as part of the rifting of Amazonia (Precambrian northeast South America) from Laurentia (Precambrian North America) and became inactive once seafloor spreading was established. However, unlike most failed continental rifts, it was accompanied by unusually large amounts of volcanism both during and after extension.