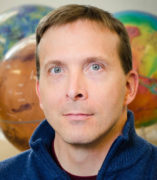 I am a planetary scientist. My research centers on the study of the processes that shape the surfaces of the bodies in our solar system. Specifically, I am a geodynamicist who examines the response of an outer, mechanically stiff layer of a planet (known as the lithosphere) to various loads. The thickness of this lithosphere is tied directly to the thermal state of the body, which provides clues to its long-term evolution. Recent projects, done in collaboration with a host of talented colleagues, include:

1. Crater relaxation: craters are the most common landform in the solar system, formed from the very high-speed impact of a meteoroid on the surface of a body. The topography of an impact crater may change (or relax) over long time scales, because solid geologic materials may flow, just like glaciers flow on Earth. The icy moons Ganymede and Callisto, the two largest satellites of Jupiter, show a range of crater forms, from completely unrelaxed to fully relaxed. My work was the first to demonstrate this range using the expected mechanical parameters of ice and assuming reasonable thermal states. In addition, my most recent efforts have explored for the first time the consequences of leftover heat from the impact itself on the long-term relaxation of the crater topography. The extreme central peaks found in some large, old craters on the satellites of Saturn are likely produced by relaxation augmented by this remnant heat.

Crater relaxation, however, is not limited to the icy satellites of the outer solar system. I have shown that crater topography on the nuclei of comets may relax, a process initially thought impossible because of the cold temperatures in comets. A variant of crater relaxation may also occur on the rocky worlds of the inner solar system. A large impact here will not only produce topography on the surface but also on the interface between the crust and the underlying mantle. While temperatures near the surface are low enough that the surface topography won’t relax over geologic time scales, temperatures at this crust-mantle boundary could conceivably be high enough, especially when augmented by the leftover impact heat, to allow this topography to relax. I will soon begin a project to use this process to trace the thermal evolution of Mars and the Moon.

These topics are just of sampling of the projects I have tackled, which span the solar system (including the Earth!). Most of this work is done sitting in front of a computer; sadly, there are not too many opportunities for field work in planetary science. But like many geoscientists, I enjoy getting my hands dirty on occasion. Thus, I go to the field whenever I can. I have joined expeditions to Yellowstone National Park, was a crew member on research cruises to the south Pacific, and was a member of the 2003-2004 ANSMET (Antarctic Search for Meteorites) team (www.case.edu/ansmet).